Over the past year or so ConceptArt.org has been releasing a lot of downloadable art demos for very affordable prices.

I've had the opportunity to release 3 different demos so far and will hopefully have more available in the future.

There are also a number of different demos by my colleagues at Massive Black that I highly recommend if you have any interest in concept art or digital illustration. 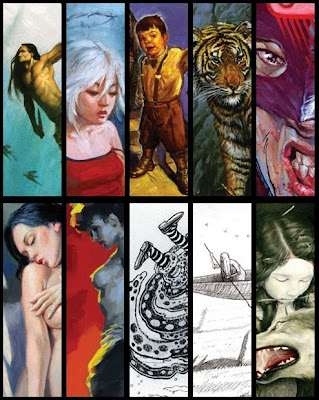 The Microvisions Auction will be starting on Ebay Monday, June 16th.

For those of you not familiar with Microvisions, it's a charity auction that goes toward the Society of Illustrators Student Scholarship Fund. For the past 3 years illustrator Dan Dos Santos and Tor/Forge/Starscape Art Director Irene Gallo have gathered fine groups of illustrators willing to take time out of their busy schedules to donate work for the auction. All of the donated pieces are 5x7 inches and are originals (no digital/photography).

This was my first year participating and I am really honored (and humbled) to have my work up beside these amazing artists. The artists this year are Daren Bader, E.M. Gist, Joe Jusko, Nic Klein, Todd Lockwood, Glen Orbik, Yuko Shimizu, Shaun Tan, Sam Weber, and myself.

When the auction begins, you can probably just search for "microvisions" in Ebay to find the auction. If you can lend any support, we would really appreciate it.
Posted by Jason Chan at 9:20 AM

Some not so recent news. I did some work last summer with DC Comics and Overbrook Entertainment for the movie I Am Legend. I was commissioned to do two short comics that would be featured in a special promo comic along with some other great artists. You can view that comic in on the web now, here.

The two stories I did were also turned into some pretty cool animatics by Sequence. They are now special features on the DVD release of I Am Legend.

You can view the animatics here and here.
Posted by Jason Chan at 12:39 AM

The "Shadowmoor" expansion for Magic: The Gathering has been recently revealed and is slated for a May 2 release. Here are my contributions to this set of cards. I'm particularly proud of this first one, the Wilt Leaf Liege. I have more Magic cards on the way and I will post them when they are released to the public.

Hey guys, here's some old stuff that I haven't gotten around to showing yet. More to come later.

This is a cover I did for Imagine FX June 2007. It was a special issue with four different covers. Each cover was based off of a classic masterpiece. My piece was based off of Botticelli's "The Birth of Venus." Looking back on the image almost a year later, I'm pretty happy with a lot of the elements, but there are a few things that are screaming to be fixed :P I'm really not happy with how I painted the woman on the bottom right. Maybe one day I'll go back and fix it... Or not.

This is a cover I did for the book Lucifers Fængsel (Lucifer's Prison), published by Phabel, a Danish publishing company. I don't think a scene like this ever takes place in the book, but it was fun to paint and I'm glad that they liked the idea. It's really cool when publishers and authors just let you run with ideas :)

The 2nd round of the Thunderdome: Last Man Standing contest on ConceptArt.org has been posted. Here is my entry for the second round. This round's theme was "Outbreak." I knew everyone would probably draw zombies, so I thought I'd give it a little bit of a twist. I'm actually pretty happy with how this came out given how little time I had to work on it.

For those of you who have not been following the tournament, here's my first round entry. The theme for this one was "Underneath it all."

Well, I decided since I'm too lazy to update my website, I'd start a blog and see if that works.
I'll start things off with a poster design I did for the ConceptArt.org 2008 Seattle Workshop (which was awesome).
I have more stuff that I never got the chance to post that will be popping up in the near future as time permits, so stay tuned.
If you're looking for some of my older work from 2006 and earlier, you can click on the "Gallery" button on the side panel to jump to my old gallery site.
Posted by Jason Chan at 8:45 PM